You can't have missed it, yesterday was the last Fortnite event of Chapter 2 Season 2.

The event was called 'the device' and was watched and played by over 20 million gamers over the world if we trust Epic games tweet. Those numbers on a monday afternoon are more than crazy! 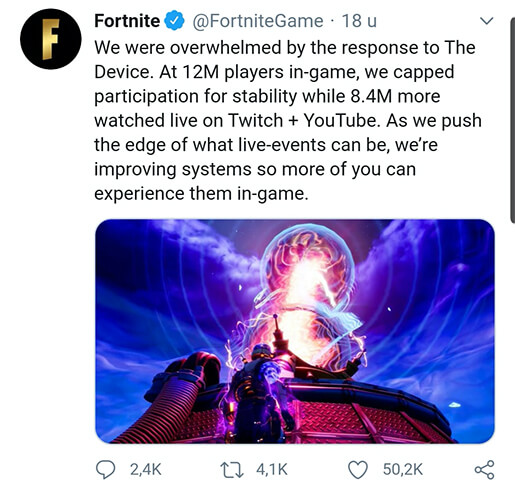 The device was the closing of season 2 and at the same time the prelude of the long awaited season 3 that starts June 17.

It was known that the epic servers couldn't handle the pressure yesterday, but now that we have the figures, it's obvious why.

More than an hour before the start of the event there was already a maximum of 12 million gamers online to join the final event, so Epic games sent out a message to please not join the servers anymore and instead watch the event live on Twitch or Youtube. Also on the streaming programs the amount of people that didn't want to miss out on this doomsday event was huge. 8.4 million people saw the 12 million others play the final event, making a total of a little over 20 million players! Epic made a promise that they will involve the capacity of the servers so that more gamers can compete in the Fortnite events in the future. 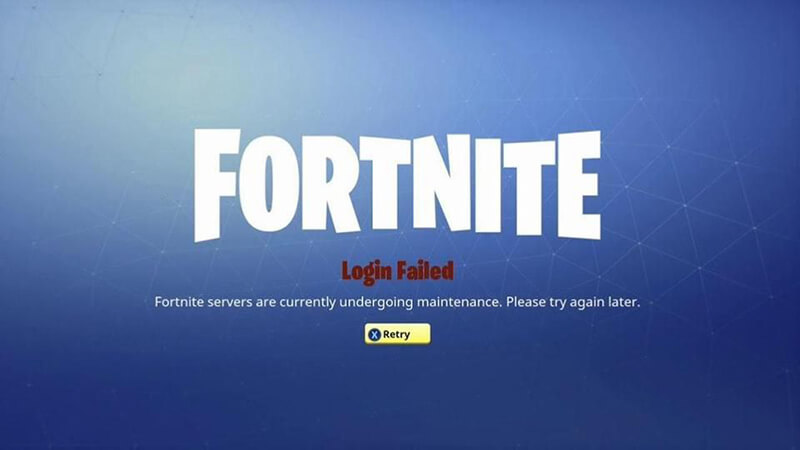 What do we know about season3?

Most importantly is the question when does the new season being released, the answer is June 17th. After all the waiting due to the covid pandemic the new season is finally here while the original release was planned for April 30th this year.

Not only will Epic games change a lot of skins and weapons, but it’s very likely they will also have a great change in areas for the new map. Season 2 was enriched with places such as ‘the shark’, an island in the shape of a shark with the mini boss on it called Skye. Also new was ‘The agency’ in the middle of the map where we could find the boss Midas. What will happen in the new season is not clear by now but it looks like Epic will throw a bomb on the current map and start all over like they already did before.

Will Aquaman be the main character of Fortnite season 3?

Epic games is teasing season 3 for a while now and we’ve seen a lot of water and a tridan in some of the teasers. Fans thought that it was maybe hinting to a crossover with Aquaman, but now that Jason Momoa shared the teaser on his personal instagram it looks like they really managed to make a deal with DC Comics.

Effects of the live event

During the last event, ‘the storm’ is transformed by an evil device into an enormous tidal wave, instead of the simple purple glow you now witness a wall of water filled with sharks and fish while Fortnite teasers show an 'unidentified swimming object'.

Today, a famous fortnite leaker tweeted about an encrypted file that probably shows the outlining of a new skin. As you can see it has a lot in common with ‘Black Manta’. One more reason to believe that the new season is about Aquaman vs. Black Manta. 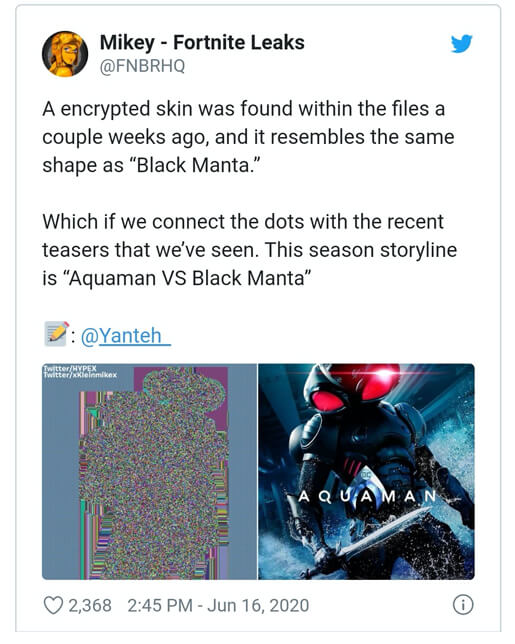 Fortnite has already worked with names as Star wars, Marvel and Stranger things. In the current season there was a way to unlock a Deadpool skin by finding things for him, while he was chilling on his Yacht. The question is: is Fortnite allowed to combine DC and Marvel characters in the same game?

The fact that Jason Momoa shared the tridan isn’t actual proof of Aquaman being involved in the third season. It’s also possible that Jason is personally excited for the new season because he is a player. But the fact that the big man behind Fortnite shared Jason’s status sure as hell smells like something is going on.